The St. Paul’s Church labyrinth is located on sacred ground—the site of the original church building and cemetery. The labyrinth can be found just of S. Jefferson St. in Alexandria, on the alley behind Southern States. Our labyrinth is a joint project of the congregation and Zac Dietz who earned an Eagle Scout award for the work, and is available for the community to use as a form of prayer and spiritual reflection.

For centuries Christians have utilized different practices by which to engage in prayer, meditation, discernment, and service. One of the most ancient practices has been that of walking prayer. The ancient Christians used the practice of pilgrimage to and from Jerusalem as a symbol of their spiritual path with Jesus Christ. As Christianity spread across the Mediterranean world and beyond, pilgrimage to Jerusalem was not always possible and so Christians began using the natural pattern of labyrinths as a spiritual practice by which to engage in walking prayer. From that first walk from Jerusalem on the road to Emmaus Christians have believed that our spiritual struggles are solved “by walking” as St. Augustine once said. It is by walking with Christ both literally and spiritually that we find our identity as Christians.

What is a Labyrinth?

A passage in Jeremiah calls people of faith to walk ancient paths. The prophet reminds an exiled people of a sacred path that they once knew and lost but could know again. He writes, ”Stand at the crossroads, and look, and ask for the ancient paths, where the good way lies; and walk in it, and find rest for your souls” (Jeremiah 61:6). The labyrinth is one of many spiritual tools for finding rest for our souls. Lauren Artress, an Episcopal priest writes of the purpose of labyrinths in the lives of Christians, “The labyrinth is a spiritual tool that has many applications in various settings. It reduces stress, quiets the mind and opens the heart. It is a walking meditation, a path of prayer and a blueprint where psyche meets Spirit.”

A labyrinth is a singular path that leads from the outer edge in a circuitous way to the center and then back out again. A labyrinth is meant for you to find yourself in a deeply spiritual sense. It orders chaos. Labyrinths are not the same thing as a maze. A maze is a puzzle meant to confuse you. The labyrinth is a spiritual tool with one path into the center and back out the same path into the world. It is often said that a maze is “meant for you to lose your way and a labyrinth is meant for you to find your way.” As followers of Christ walking this sacred path of prayer we release our worries, fears, and burdens, we receive God’s presence, peace, and guidance for our life journey, and we return out to the world a changed and transformed person. Many will find that they enter this sacred walk with burdens that they can release in the center with Christ and that they walk out feeling lighter, free, and in tune with the path God has for their lives.

Labyrinths can be traced in the Christian tradition back to some of the earliest centuries of formation of the church. With the spreading of the faith, especially after Constantine made Christianity the religion of Rome, labyrinths began to be used in the coming centuries as a spiritual tool for the art of pilgrimage. The theology of pilgrimage is one that is centered in walking prayer and devotion to God. Jesus and his family made such a pilgrimage in his early years to Jerusalem to make an offering at the temple. Such theology also builds on the concept of certain places having the spiritual capacity to tell the story of a faith. For Christians this has historically been the story of Jesus’ life, death, and resurrection in and around the holy place of Jerusalem. So, Christians would pilgrimage to Jerusalem to embody and live into the sacred story of Jesus. As Christianity spread, a theology of sacred places became less important because of the risen Christ and his ability to be made known in the lives of followers wherever they were located. Christians continued to use the practice of prayer walking to connect with the risen Christ.

The earliest known labyrinth in Christian usage can be found at the basilica of San Reparatus at El Asnam as a Roman mosaic. This basilica is located in current day Algeria and is believed to date back to the fourth century. Although similar to Roman labyrinths of the time, in its center are the words Sancta Ecclesia, meaning “Holy Church,” and this clearly marks it as Christian. Moving forward from the early period, much of the information regarding the use of labyrinths over the next several centuries has disappeared from history, but they reappear as diagrams in ninth century manuscripts of the church. The oldest labyrinth printed during this time period is the 7 circuit Jericho (In a 7 circuit labyrinth there are 7 turns before reaching the center, especially as found in the Christian labyrinth of Jericho) found in a monastery dating back to 822 CE. The second oldest dates back to 871 CE and was printed by German monk Otfrid of Weissenburg. The abbey in Weissenburg where he resided is now officially the city of Alsace in modern France. Otfrid’s labyrinth design was the precursor to what has become known as the medieval 11 circuit pattern.

The height of labyrinth usage came in the Middle Ages when Christians built them into the floors of churches and cathedrals across Europe, the most well-known of which is that of Chartes Cathedral near Paris. Following the Reformation, many European labyrinths were destroyed due to iconoclastic notions of their tie to Roman Catholicism. Labyrinths experienced a renewal of usage in the early 19th century, which is when the labyrinth in Ely Cathedral, Cambridgeshire, England was built. Today, many have come to express a deep desire to seek a spiritual path and once again turn to the labyrinth as a spiritual practice of discernment, prayer, and meditation. The labyrinth is developing a strong renewal among Christians and it is spreading across the world, especially in the United States.Type your paragraph here.

​Are the different kinds of  labryinths?

The most ancient of labyrinth designs, the classical design is found worldwide. It appears as petroglyphs (rock engravings) in Spain (dating from around 2000BCE), on silver coins from Crete, laid out with rocks in northern Europe, painted on bark in Indonesia, and carved on rocks in the deserts of the American Southwest. The seven concentric (circles that circle back on themselves) circuits have variously been suggested to correspond with the seven days of Creation.

​​Most famous of the medieval labyrinths is the pavement labyrinth found within the nave of Chartres Cathedral, France. Echoing the shape and complexity of Gothic rose windows, this labyrinth was laid in the early 13th century and is still walked by Christian pilgrims today. Walked by pilgrims as a metaphor of the journey to Jerusalem, medieval church labyrinths illustrate the allegory of Christ’s life and destiny (birth, teachings, death, resurrection, ascension). This is the most frequently encountered pattern of modern labyrinths.

​​Found throughout Scandinavia and also in northern Germany but principally around the shorelines of the Baltic Sea, this labyrinth is also known as the “Baltic Wheel” or “Wheel,” after an important example in Hanover, Germany. Typically Baltic Wheels are used more for community events than spiritual practice, but they can be used for both. These labyrinths are ideal for continuous processions, ceremonies, and games in communities, and this is often reflected in the traditions and folklore associated with labyrinths of this type.

THE MAN IN THE MAZE

The most prolific of the Native American labyrinth symbols, the “man in the maze” design is woven into the baskets produced by tribes located in southern Arizona. These labyrinths are difficult to place historically, but they are essential to understanding native culture. Implicit within this image is the importance of the human imagination and interaction with the design, just as we have interaction in our relationship with God. 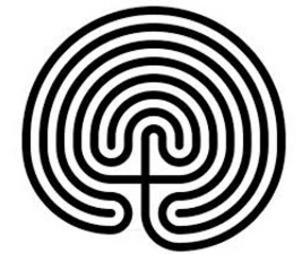 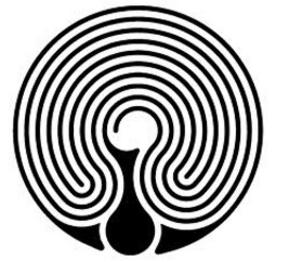 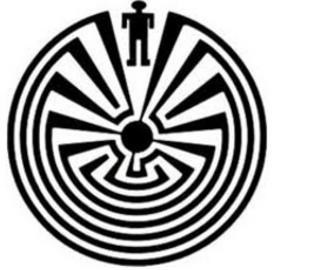 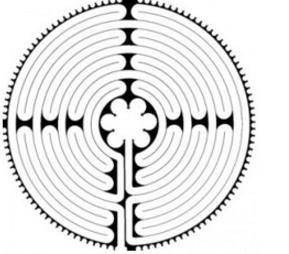